Remote commands are a client-side solution for triggering code in your native app using a tag in Tealium iQ Tag Management.

Remote commands combine the power of native app code with the convenience and control of tags in Tealium iQ Tag Management. Remote commands use custom URL schemes as a way for JavaScript tags to trigger methods inside your app. A tag in the non-rendered web view sends custom requests for the app to receive. These requests are processed by a remote command handler that triggers custom native code or a vendor’s SDK.

Use remote commands in two ways:

For example, you may need to access a value stored in a cookie or localStorage inside the non-rendered web view or want to personalize parts of your app, such as launching a survey after the user has made a purchase.

The steps to configure a post-purchase survey would be:

You can now control the survey title, URL, and logic using extensions in iQ Tag Management without needing to re-deploy your app.

A remote command has a command name and a payload of data.

Remote commands must be defined in your native app at build time. The remote command tag only executes code that is already defined on the device.

In the native code, a helper function named addRemoteCommandID registers a handler for a remote command. The callback function responseBlock accesses the payload within response.requestPayload. Payload variables referenced here have a matching data layer variable configured in iQ Tag Management.

In iQ Tag Management, a remote command is set up as an instance of the Custom Remote Command tag with the following settings: 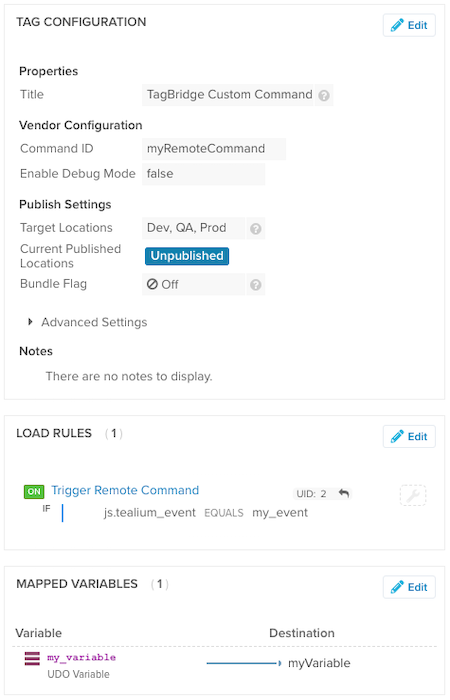 A vendor integration is a pre-built remote command module that installs the vendor SDK and defines native code handlers for the vendor’s API.

Add a module for the vendor integration to the build script for your platform. Modules are named in the format of TealiumVendorXYZ, for example TealiumBraze.

To install, replace the vendor’s dependency with the Tealium remote command dependency. For example:

Was this article helpful?